I'm familiar with the use of bridge tables when bridging between a Fact table and a multi value Dimension. However, this situation is a little different.

I'm working with a pre-production model which is unusual. The entire model is more or less dominated by a Fact table called FactWebRequests. The reason is that the other Facts which are collected are done so because of a Web Request which is recorded in Fact Requests. Please consider the following diagram example. 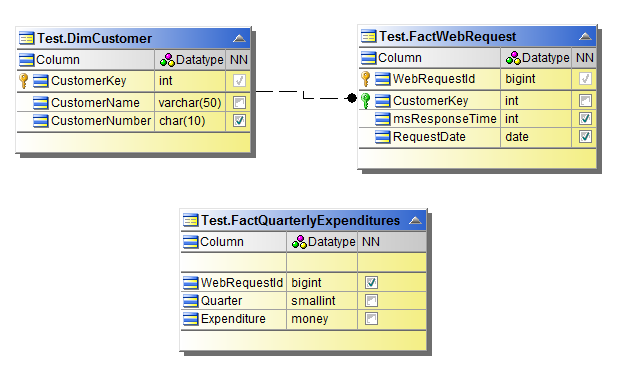 Incidentally, FactWebRequest would accumulate approximately 18 million records a year at the current rate and I'm working with SQL Server 2012. The FactQuarterlyExpenditures would increase at 3-6 times that rate per year.

What do you folks think of my assessment? Am I missing something here?

Why not stick to a dimensional model?

You do not 'bridge' fact tables. What are your dimensions for FactQuarterlyExpenditures? WebRequestID? What about customer, or date, or other aspects of the measures?

I too am curious about this topic.

I have the following Scenario where i have a many to many between two fact tables.

I have the FactPermitReqirement which shows the limits for permits based on each requirement. Then i have another fact of Analytical Results which hold a value
for a test result. I need to know the relationship between each Analytical Result and the Permit requirement without dupes and I wasn't sure how else to handle it.

Is the Many to many in this case correct ?

Given any two fact tables, the relationship between the two is assumed to be many to many.

Its a matter of form. In a dimensional model each fact table stands alone, surrounded by its context, the dimensions. You are free to create whatever dimensions you want, as well as include degenerate dimensions. You can combine measures from any two fact tables at query time provided they have some context in common (the conforming dimensions).

The advantage of this form is you can introduce new fact to the DW at any time, without concern of or modification to existing fact tables.

Thanks for the reply and insight.

In my case how else could I associate the Permit limits to an analytical results given that there are many locations for each Permit but each result only has one location ?

It sounds as though I should Dump the "PermitAnalyticalResult" table and as you mentioned and just provide the info a query time given that they share the same location dimension ?